My friend and colleague Andrea Kihlstedt came by recently to get help writing a speech.  The problem was, she had just 2 hours free — and by the time we’d settled down to work, it was more like 1-3/4.

With that in mind, she said, “At least let’s talk through my idea.”

Writing a fully-scripted speech is a labor-intensive process.  (It can easily take 30 hours to write one hour of powerful words.)  But Andrea neither needed nor wanted a fully fleshed-out script.

Instead, what she needed was a speech framework; an action plan; an Instant Speech structure that she could fill out in real time, in front of an audience.

Andrea, as I already knew, was an excellent candidate for this approach, because of her experience in her field, and her willingness to experiment.

But even if you don’t think that describes you, read on; because a surprising number of people who’ve never considered this approach discover that they love speaking from a framework once they try it. 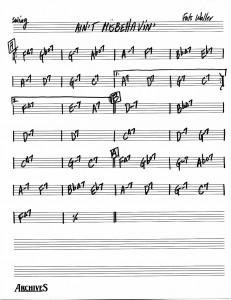 When you speak from a  framework, you’re like a jazz musician reading a “chord chart.”

Chord charts like this one give you the structure and harmony of a song.  (Add the melody and you’ve got a “lead sheet.”)

In this Louis Armstrong recording of Ain’t Misbehavin’ (click to hear it), the band is playing with a full “script,” or orchestration. But Louis’s vocal and trumpet solos are improvised (so is the piano solo) — meaning that, although they closely follow the song’s structure, he creates them in the moment, giving his interpretation of the song.

The same thing is true when you speak from a  framework. instead of a script

But exactly how you say things — that’s up to you!  You have a freedom that the scripted speaker lacks.

You also have control, which makes this an approach that appeals to both the judging and perceving public speaking personalities.

Let These Questions Lead You To a Speech

Andrea and I wrote her speech in 70 minutes by following a series of clear, sequential  steps.  Each of these steps is defined by a question.; and each of your answers will be affirmed or refined when you answer the questions that follow it:

Andrea will be speaking to an audience of fundraising professionals, and through her decades of consulting experience, she’s thoroughly versed in their needs and concerns.

If you don’t have the “inside track” with an audience, do some research to learn about them, as I did last spring when I spoke to a group of primarily Daredevils.

Before coming over for her session, Andrea had chosen two possible topics for her speech.  One was about “Creating a Culture of Asking” (for donations); the other was about the internal struggle between what Andrea calls Lizard Brain and Lion Heart that shapes philanthropy.

It seemed to me, in reviewing these ideas, that they were very similar; and Andrea agreed.  So we put them together to create her working title (your title describes your working concept), “Lizard Brain vs. Lion Heart:  How to Create a Culture of Asking.”

After a few minutes, we realized that the words “How to” were pulling in the wrong direction (she’s more focused on why to), so we dropped them.

Notice that we didn’t noodle with or agonize about the title.  It was (pardon the expression) “close enough for jazz,” so we used it and let the flaws reveal themselves during our ongoing process.

In other words, what is the central point of your presentation, a/k/a the “Key Message”?  (It should be the most important thing that you want your audience to understand.)

Andrea chose the working key message, “If you want to raise more money, you must create an organizational culture that gives people the courage to ask.”

Choosing a key message does take some back and forth; but again, don’t agonize or theorize about it  Choose the best one you can, and move forward.  You can always  refine it later.

And notice that a good key message like Andrea’s suggests everything that will follow.  It’s like the overture to a symphony, opera or Broadway show.  It introduces all the musical themes (ideas), and whets the audience’s appetite to see how each one will play out.

Now, of course, there is no “rule” that says you choose three topics for the body of your speech.  I’m suggesting three because (a) it works, and (b) you need to start some place in thinking about how to divide up the vast body of knowledge you have on your topic.

For the body of her speech, Andrea chose this working list of topics:

Putting everything that she wants to say into one of these three “buckets” will help Andrea organize her vast store of insights.  (And she’ll know the buckets aren’t quite right if she finds something big and important that doesn’t fit.)

And when the time comes to deliver her speech, organizing it in this way will help Andrea’s audience understand and remember what they hear.

At this point, Andrea had the framework for her speech.  Her next steps were to:

What happened to the rest of Andrea’s 1- 3/4 hour session?  We looked at images for her slides on  iStockphoto (very good stuff that you pay to lease for very little), and I introduced her to the wonders of Apple’s Keynote, which is like PowerPoint but 100 times better (just another reason for Mac users to gloat).

Next Steps — Polish and Practice

You probably know what comes next.  Andrea will practice giving her speech at home (out loud! practice your speech out loud!), and then get back to me for speaker coaching that focuses on her delivery.

So, is it as easy as it sounds?

It can be, when you let go of agonizing over every word and trust that you know what you’re talking about!

If you have any questions, leave them here.  I’ll answer…  and we’ll all learn something.