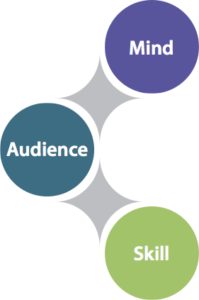 How Do You Know if You’ve Given a “Good” Speech?

As public speakers, we want to do our best.

But presentations can be hard to evaluate. Was it a good speech if:

Or can a talk only be “good” if it meets the high standard of a TED talk?

What Is a TED Talk, and What Standard Does It Set?

For those of you who don’t follow speechmaking fashions, a “TED talk” originally meant nothing more than “a talk that was presented at a thought-leader conference called TED.” (TED stands for technology, entertainment, design. The organization’s tag line is “Ideas Worth Spreading.”)

That was more than 30 years ago.

But today, thanks to the Internet, TED has evolved into an 800-pound gorilla in the public speaking forest. Millions of people have watched hundreds of TED talks online, and for many of them, TED talks have become synonymous with public speaking excellence.

Is this approach to public speaking valid, effective, and entertaining ? Yes.

Is it the right approach for business speakers?

In general, I don’t think so!

How the “TED” Ideal is Ruining Business Presentations

TED can’t ruin business presentations, because most of them are pretty awful to begin with.

But what TED can do — and has done to lots of people — is add a layer of unrealistic expectations to the already-impossible demands of business speaking.

Why is business speaking so tough? It’s not unusual to:

Even when you’re the master or mistress of your own content, business presentations are generally lousy because almost no one knows how to prepare, practice, or present them.

(The second chapter of my book, Speak Like Yourself… No, Really!, is devoted to the standard “doomed to fail” approach to business presentations, which usually begins with a data dump.)

When you take this already loaded situation and add the expectation that you’ll get up and speak without notes, conversationally, with the sophisticated cool of an ideal TED presenter…  things are really stacked against you.

I’m often approached by prospective corporate clients who want me to turn their executive speakers into TED-style presenters — in 30 minutes, on the morning they’re scheduled to present!

Having proudly prepared speakers for both TEDx gatherings and the TED main stage, I can tell you that the TED process is elaborate and intensive:

Gee, why don’t the rest of us look that good every time we’re called on to speak??!!!

What’s a Business Speaker to Do about TED-Sized Expectations?

The first step is to manage those expectations — your own, and other people’s.

In this situation, take your speaking notes onstage, be yourself, and do your best; that’s all that anyone can reasonably do in two days (which is way more time than many business speakers are given to prepare and practice their presentations.

TED has done wonderful things for my industry (speaker coaching), inspired millions of people, spread important ideas, and helped all of us envision a world in which speeches are worth listening to.

Someday, that ideal will truly be embraced by business.

But until the moment when you’re given a team of experts to help create your presentation — and weeks or months off to write and practice it! — please don’t hold yourself or your employees to the TED standard.

There’s nothing wrong with giving a solid, interesting business speech…  and that is something you can achieve!

Thanks so much for all your efforts. We are so excited about these [TED-style annual meeting] sessions."