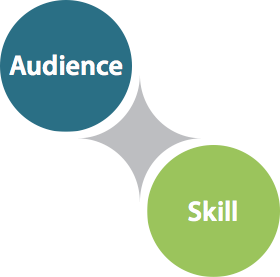 If you’re lucky enough to have learned how to write in school, you probably know a lot of “rules,” such as:

Leaving aside the issue of whether these rules make for good writing (reasonable people can disagree!), one thing is sure: They don’t apply to public speaking.

Let’s look at each one to see why.

The reason for this is that listening and reading are very different processes.

As a reader, you can linger over a passage, mull its meaning, and let it sink in. If a reference isn’t clear, you can flip back through your book or search your ebook to check on a person or event.

But listeners don’t have that luxury.

When you speak in public, your ideas are moving past your audience’s ears in real time. If someone doesn’t catch a word or an idea when they first hear it, there’s no way for them to go back and figure out what you meant — unless you repeat yourself.

Every time you repeat an idea, you’re giving listeners another chance to hear, understand, and think about your ideas.

And that’s not a bad thing; that’s good!

Writing Rule: Don’t Begin a Sentence with a Conjunction.
Speaking Guideline: But Sometimes You Should

Conjunctions are words like and, but, and or that are used to connect two ideas, or clauses. (This Schoolhouse Rock song, with words and lyrics by Bob Dorough, explains.)

Traditionally, you’re supposed to keep those connectors in the middle of your two ideas where they belong.

But in public speaking, it often works to begin your thought with a conjunction because we have other ways to connect ideas. We can use our voices, body language, even a dramatic pause to show the relationship between two thoughts.

More importantly, public speaking should mirror the way that we actually speak — starting conjunctions and all.

So leave this rule in high school, where it belongs, and let your sentences begin in the way that feels most natural to you.

Writing Rule: Don’t Use Clichés or Formulas.
Speaking Guideline: On the Other Hand…

Originality is much prized by literary writers, as it should be.

But before you go for the same spoken standard, ask yourself: What’s my goal as a public speaker?  Is it to turn an original phrase? Or to draw people into my ideas?

If you’re trying to engage an audience, certain formulas can be very helpful.

Just as repetition is useful in public speaking, “formulaic” statements can help your audience follow your reasoning, or just keep up. Examples of these statements include:

So, does that mean you should go out of your way to include clichés in your public speaking?

But neither should you refuse to make a statement that serves a vital purpose just because it’s not original.

Think about whether a particular phrase is helping to keep your audience on track; and if it is, deliver that cliché proudly.

The easiest way to make sure that your writing sounds more like public speaking than like written prose is to read it out loud as you’re writing it.

If your work environment isn’t set up for long bouts of mumbling at your desk, read it out loud in your own mind. In other words, listen to yourself speaking the words, as if you were speaking them out loud, while you write.

And of course, when you’ve finished writing your speech, message, or argument, actually read it out loud to check that it’s not stiff, loaded up with vague language, or following a bunch of rules that make it harder to say.

My post on how to make your written speech more conversational will help you edit your writing to sound more like speech.

And trust me, your listeners will be grateful!

Much of what I have to say about overcoming fear — my own and that of my public speaking clients — is boiled down to this one word: Breathe! Of course, having the word engraved on my wrist (yes, that's my wrist in the photo) is another story — a short-short story that accompanies my novel, The Tattooed Heart. But "BREATHE" isn't just a fashion statement. It's the key to unlocking your public speaking power...  to making yourself heard...  and to managing whatever level of fear or self-doubt you may sometimes experience. (Because almost everyone  feels some level of public speaking fear or self-doubt some of the time, no matter how experienced or skillful a speaker they are! You knew that, right?)

You Know How to Breathe, But You Can Learn How to BREATHE. Here's How!

The best way to get familiar with your breathing is to notice it, and this exercise will help: That wasn't hard, was it?

The More You BREATHE, the More Benefit You'll Get

To get the benefits of deeper breathing, you don't have to study for hours a day or become a yogi or an opera singer. Just do this exercise when you think of it, and you'll gradually get comfortable using your breath to help relax yourself. Pretty soon you'll find yourself breathing more deeply, getting more air, and feeling a little more relaxed even when you're not trying to. And you'll know how to calm yourself if and when fear of public speaking strikes!