If you’re interested in delivering a non-apology, you can learn a lot from Rupert Murdoch, the man who’s arguably done more than anyone except Grover Norquist and the Koch Brothers to shape our public discourse in the U.S..

After his newspaper, News of the World, was caught red-handed hacking into British journalists’ cell phones, Murdoch:

We’re Sorry, But It’s Not My Fault!

Fortunately for Murdoch, his denial of any and all responsibility for destroying a 168-year-old business, suborning his own government, and breaking multiple felony laws was quickly upstaged by the action when Murdoch’s wife body-checked a guy who wandered in and tried to pie the media mogul.

It’s hard to imagine that things could get more slapstick than that.

So, with an apology (ah-hem) to Harry Shearer, who features lame apologies each week on his political comedy radio program Le Show, I nominate Murdoch for Apology of the Week. 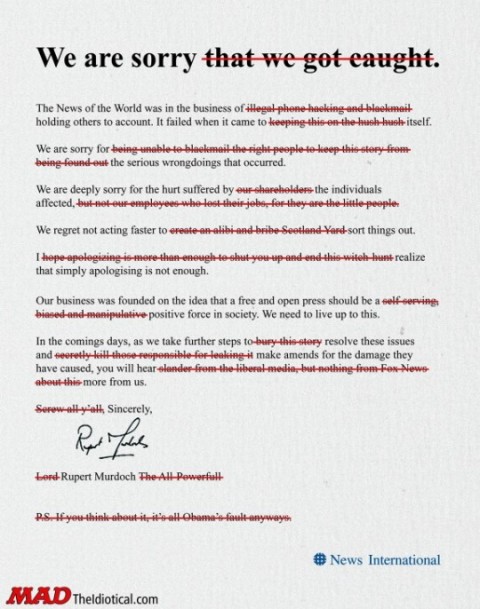