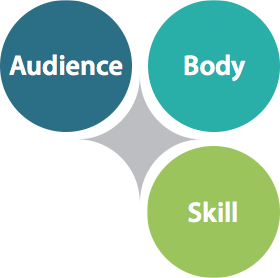 Of course, sometimes that’s because the person who’s talking doesn’t have much to say.

But even when you’re very interested in what another person is saying, it’s still hard work. To truly listen to someone else, you have to:

Arguably, the listener is working just as hard as the person who’s speaking — and sometimes, harder!

Show Respect for Your Listeners by Being Easy to Hear

When someone else is listening to you, here are some things you can do to make it easier for them to concentrate, to follow, and ultimately, to retain your ideas:

With practice, these things are easy to do. But they may feel awkward when you first try them — particularly if you’re used to rushing, mumbling, or talking wall-to-wall.

Don’t worry, though. Even a minute a day of playing with these public speaking best practices will add up to a more audible speaking style.

And a more audible speaking style will make it easier for people to listen, understand, and remember the important things you’re saying — to everyone’s benefit! What Does It Mean to Vaccinate Your Audience?

You're probably familiar with the principle behind vaccination: Vaccines contain a small amount of something that has the potential to make you very sick – let's say, the polio virus. Why would you willingly get shot up with polio virus? Because (and I apologize to scientists everywhere for this quick and dirty explanation), The same principle can work for you with public speaking. There are some situations in which it makes sense to vaccinate your audience before you inject an idea that might otherwise (not to take the metaphor too far) make them sick.

Vaccinate Your Audience Against Bad News

Sometimes, we have to tell an audience things that they would rather not hear:

Your sales quota is going up.

Some of you are going to be laid off.

We did not meet last year's fundraising goal.

If you were delivering this sort of news to a family member, you'd probably try to soften it in some way. You might start by saying something like,

Listen, I'm really sorry about this, but...

I have something to say that may upset you.

Try not to freak out too much about this, but...

Of course, the family member you're speaking to may still react with anxiety, anger, resentment, or myriad other difficult emotions — but at least you've given them a fair warning that what you're about to say may be hard to hear. When you vaccinate your audience in a public speaking situation, you're giving them the same fair warning, in hopes that your actual news will go down easier.

Vaccinate Your Audience Against (Perceived) Insults to Their Status

You may have noticed that high-status people can sometimes be more fragile or insecure than the result of us. (Arguably, they can "afford" to be easily offended, and we can't.) A friend of mine recently discovered this when she delivered a speech to top executives that she'd given many times before to managers. And while the rank-and-file managers loved her speech, which was filled with practical advice, the executives were very negative. Why? Probably because this group expected to be spoken to with deference, not given matter-of-fact suggestions for ways that they they could do better. To understand how to vaccinate your audience against imagined attacks on their status, look at these three pairs of statements. (The ego-stroking adjustments are in bold.)

In each of the second statements, you're complimenting your audience by implying that they're already so well-informed that what we're doing is just a review, or a re-statement of the obvious.. This can seem silly in cases where you suspect they actually don't have a clue. But remember: You don't just vaccinate your audience to keep them healthy. Sometimes it's good for the health of your career, too!

Vaccinate an Audience that Disagrees with You

There are times when — separate from their emotional reactions — your audience will just disagree with you.

We need to look for venture capital.

This company would be more successful if there were more women on the Board.

Jazz is the only true American art form.

Statements like these may spark heated opposition in the people you're speaking to, particularly if you present them as being settled fact...  and heated opposition will prevent your listeners from hearing (let alone being convinced by) the brilliant argument you're about to make. To hold off that ear-closing disagreement, use a vaccination phrase like,

Reasonable people can disagree about this, but I believe that...

You may not agree with what I'm about to suggest, but...

Whether or not you like this idea, I hope you'll give me a chance to convince you that...

You can't hold off disagreement forever, but with luck, you can hold it off long enough to plant your idea in some people's minds! And PLEASE NOTE: There's a big difference between using a modest-sounding phrase (like those I just listed) to strategically vaccinate your audience and using it because you're in the habit of demeaning or undermining your own ideas:

It isn't always easy or comfortable to speak in the situations I've described. But you'll feel more confident and up for the job if you choose a few "vaccination" phrases and practice them out loud until you know them cold. Use these phrases as needed in your speech...  and then go home and take two aspirin! [caption id="" align="aligncenter" width="640"]