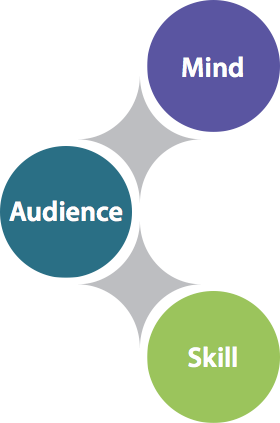 How different is “public speaking” from “talking”?

Probably not as much as you think! In fact, they’re so similar that you can sneak a small daily speech into a “regular” conversation, and the person you’re talking to probably won’t even notice!

What Is Public Speaking, Anyway?

When you make a “speech,” comment in a meeting, argue a position, or deliver a message, you’re likely to have a particular outcome in mind. You want your listener to do something — buy your product, sign up for your program, agree with your values — or do something differently.

When you just “talk,” on the other hand, it’s more open-ended. You may have a general goal  — to have fun with friends, or gripe about the day’s frustrations — but you’re not actively working toward a set result.

To accomplish a public speaking goal, you might take some or all of the following actions, which rarely figure in “just talking.”  You might:

Your listener won’t necessarily realize that you’re taking any of these actions — but whether or not they’re aware of your thought process, you’ll know that you’re in public speaking mode.

To Make a Small Daily Speech, Think Like a Public Speaker!

If it’s true that the actions I’ve listed distinguish public speaking, then it’s also true that, each time you practice doing one of these things, you’re practicing a public speaking skill.

In fact, I’ll go a step further and say that, each time you practice doing several of them, you’re practicing giving a speech.

So the next time someone in your life (a spouse, friend, colleague, parent) proposes doing something you don’t want to do, don’t just say, “Naw, I don’t feel like it!”

Instead, seize this chance to practice your public speaking skills by making your response into a little “speech” a set of words that are intended to persuade, not just a reaction to what the other guy said.

In Your Daily Speech, Copy How Public Speakers Use Their Bodies

Of course, words aren’t the only thing that separate “speaking” from “talking.” Good public speakers also use their bodies to help them persuade listeners. To see what I mean,

Be sure, when you do this, that your message is clear. Try saying:

“I’d rather not get pizza for dinner. I need to eat some vegetables, and you probably do, too.”

“I understand that you need this work tomorrow. I’m going to finish it from home.”

Public Speaking Is Magical, But It Isn’t Magic!

Keep it simple, clear, and focused; just state what you want with authority.

Your delivery — and your expectation that people will listen — will elevate these everyday comments to persuasive mini-speeches.

And there’s a double pay-off to this action: Not only will you get more comfortable using basic public speaking skills, but you’ll get probably get more of what you’re asking for, too!

If you don't know to look for something, how are you ever going to see it? —Supreme Court Associate Justice Sonia Sotomayor

I couldn't have been more thrilled when one of my favorite clients invited me to a New York Women's Bar Association dinner honoring long-time member and Supreme Court Associate Justice Sonia Sotomayor.

I've written about the public speaking style of Justice Ruth Bader Ginsburg, and was eager to see the dynamic and brilliant Sotomayor speak in person.

Back in 2009, when Sonia Sotomayor was nominated to the Supreme Court, some people’s feathers were ruffled by a statement she made five years earlier, to wit: “I would hope that a wise Latina woman with the richness of her experiences would more often than not reach a better conclusion than a white male who hasn’t lived that life.”

While this was clearly not her most politic comment, Sotomayor's assertion that women's life experiences are an advantage thrilled her female listeners — and not just the Latinas!

Of course, Sotomayor's male colleagues have life experiences, too — and those experiences influence their jurisprudence, just as Sotomayor's childhood in the Bronx influences hers. The difference is that people who hold power don't have to notice how their experience influences their attitudes (and, through their attitudes, the lives of everyone else!). Powerful people assume that their experiences and beliefs are the norm ("mankind," "history") and therefore don't need to be explained, or even remarked on. Of course, it doesn't work that way for those of us who hold less power:

In Spite of the Risks, Let Your Public Speaking Reflect the Life You've Lived

You might think that Sotomayor's experience is an argument for playing it safe in your public speaking. But in spite of the possibility of being misunderstood, the reverse is true: It's important that you be yourself when speaking in public, because authenticity is the source of your power as a public speaker — and because if you don't draw on your own unique experiences and share your hard-won insights with your audience, you could be anyone up there talking!

How does this apply to one of the most important types of public speech we've got — that of Supreme Court Justices?

Here's what Sotomayor told her New York Women’s Bar Association (NYWBA) audience (her words are transcribed below the video):

Transcription: "[How do you separate] what may or may not be proper from what Justice Alito does? And so backgrounds make a difference. They make a difference and influence you, as I said, consciously or unconsciously. What you don't want to do as a judge is let those biases interfere with trying to look at things objectively. But if you don't know to look for something, then how are you ever going to see it? [APPLAUSE] That's why we need people with a wide variety of professional experience coming onto the court system. We've never had a matrimonial law Justice. [laughter] So who's going to change that someday, in this room?" (emphasis mine)

In Public Speaking, You Are Also the Message

Of course, it wasn't just Sotomayor's words that delighted her NYWBA audience. It was her presence, as she literally walked off the stage to stand among us, and share her thinking at close range. I'm usually not the star-struck type, but when she stood RIGHT NEXT TO ME and put her hand on my chair, I thought I was going to swoon! There aren't many public speakers who can make me breathless — but Sonia Sotomayor did the job, using nothing more dazzling than authenticity, wisdom, and warmth! And here, to give her the last word, is a lovely segment Sotomayor did on Sesame Street about the meaning of the word "career":