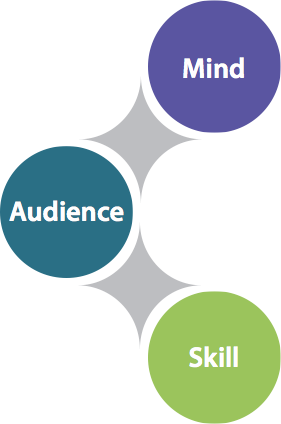 In a post called What Mudbugging in a Chevy Taught Me About Public Speaking, I discuss the predictable ways a public speaking situation can veer “off road.”

You might think that more experienced speakers avoid these twists and turns; but sometimes we don’t — and my latest detour came when I recently spoke to members of The Society of Women Engineers at Hofstra University.

In my own defense, I do try to find out everything I can about an audience, and I’d asked a lot of questions about this one beforehand.

But I’d spoken to SWE members at Columbia University the year before, and that crowd was 100% female. So, without asking or even noticing my assumption that this audience would be the same, I carefully prepared a speech that was:

My first clue that I’d made a mistake came when I showed up at Hofstra and discovered that…   a third of the attendees were men.

When You Lose the Script, Don’t Throw the Baby Out with the Bathwater

(And yes, that’s totally a mixed metaphor, but read on!)

Here’s where it would be really easy to panic and decide that everything you’ve prepared is no good and needs to get tossed.

Don’t rush to this conclusion!

For one thing, it’s almost always better to build your speech back from something — at minimum, your key message and supporting points.

And for another thing, as soon as your initial reaction passes, you’ll probably find that most of what you’ve got can work, with minor tweaks.

One simple tweak that you can make is to change the context of your speech — in other words, the framework within which people listen.

If I’d just given my speech at Hofstra without commenting on its female bias, the men who were listening might have thought,

Hey, what about me?? What does she think, the whole world’s made of women?

So my job was to change that context, which I did by speaking directly to the men:

Gentlemen, before I begin, I need to apologize.

I didn’t know that you were going to be here, and parts of the speech I prepared are oriented more toward women.

But even though it might look like I’m not talking to you, I hope you’ll put yourself into the picture — and as we go along, I’ll put you there, too.

Because women aren’t the only people who have trouble making our voices heard. In my experience, some of the groups who feel most judged when they speak include men who are:

If you belong to any of those groups, you won’t have any trouble finding yourself in what I’m about to say.

My hope was that, with this introduction, the men would be thinking.

OK, that’s a picture of a woman, but what she’s talking about includes me.

And this seems to have worked, because — as I went on with the speech — the men were avid and attentive listeners.

What About When You “Lose the Script,” Meaning Your Entire Script?

OK, you can’t always cope with a minor tweak; or even with the types of surgical strikes I describe in this month’s newsletter.

So what do you do when you have to toss an entire script just minutes before taking the stage?

So far, this hasn’t happened to me, and I hope it never happens to you. But if it ever does, I suggest that you:

After all, you can’t do worse than you would have with your now-useless script, right? This may not be your most eloquent or slick presentation, but if you jump in with both feet, you can succeed.

Is There a “Rule of 3” for How Much to Change a Script?

Of course! There’s a Rule of 3 for everything, so:

It’s no fun discovering that the speech you’ve prepared may not work; but with this Public Speaking Tip, it doesn’t have to be a disaster.

Just think of it as an off-road adventure like my recent one mudbugging in a Chevy — and look forward to the great story you’ll be able to tell! In Public Speaking Tip 60, I extolled the practice of making Instant Speeches about silly or mundane things to improve your public speaking skills. And while we're on that subject, here's another way that you can benefit from letting yourself say things that aren't brilliant, essential, original, or erudite:

You're an Introvert, or Have Nothing Important to Say in a Meeting? Speak Up Anyway!

As an introvert, I totally understand the impulse to keep quiet when you have nothing "important" to say. And I'm not suggesting that you say stupid, counter-productive, or clueless things in meetings. But in between the idiotic and the sublime, there's a world of garden-variety comments that your colleagues are more than willing to make, and that you should consider making, too. Why? Because you're better off contributing something in meetings so that you don't get overlooked.

In Meetings, It's Important that You Be Heard

I'm a fan of the Myers-Briggs Type Indicator (MBTI), a test that explores the ways in which you prefer to think and act in the world. (To learn more, see these posts about Public Speaking Personalities.) MBTI folks are big on measurements, and one thing they've measured is: Are extraverts, who tend to speak a lot in business situations, regarded more favorably than introverts, who often speak much less? The answer they came up with is hell, yeah! [caption id="attachment_11586" align="alignright" width="240"] image by Eric Peacock, Flickr/CC[/caption] In test after test, it's been established that if you say nothing during a business conversation (or worse, a series of conversations), your value will go down in the eyes of your colleagues. To put that differently: No one has ever sat in a meeting and thought,

I'm so glad that my introverted or shy colleagues have the self-restraint to refrain from making comments that aren't of real significance to this meeting. It's a pleasure to work with such thoughtful people.

Lest you think that the only reason to speak up in meetings is to raise your profile in front of others, "relatively inconsequential" comments can actually foster calm, confidence, and collegiality — to everyone's benefit. Here are some examples of non-essential comments that are likely to have a positive effect:

Am I the only one here who'd like more time to think this over?

To build on what Jessie just said... [add support or a new detail]

Comments like these are perfectly acceptable contributions to the flow and tone of a meeting, and are a good choice when you don't have a critically important point to make.

If you're not used to speaking up at meetings, you may feel awkward the first few times you try this Tip. To overcome that, practice jumping into the fray at least once in every meeting — don't wait for the "perfect" time, just jump in! — and build up gradually until you can make yourself comment near the beginning, near the end, and somewhere in the middle of any meeting that lasts longer than a few minutes. I promise that the more you practice speaking up, the easier it will become. And you may be surprised at how much your colleagues appreciate whatever contribution you make. P.S. For an accurate and hilarious look at this topic, treat yourself to Sarah Cooper's 9 Tricks to Appear Smart in Brainstorming Meetings.
Loading...
[caption id="attachment_16263" align="aligncenter" width="1024"]