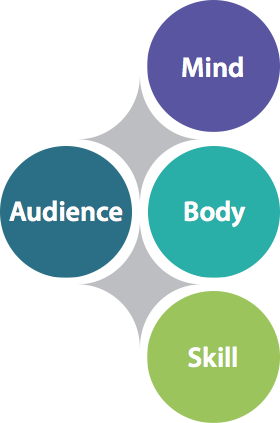 What Does Listening Have To Do with Public Speaking?

Whatever the occasion, did being talked at non-step encourage you to listen more carefully?

I don’t think so!

In general, we listen to people who listen to us.

Not Listening is a Big Mistake

For many people, being a public speaker and a careful listener don’t go together.

I think that’s because public speaking makes us nervous — and we all tend to listen less when we’re nervous or under stress.

Yet, ironically, when we’re speaking up for ourselves, our organizations, or our ideas, we need to listen more, not less.  Only by listening can we discover:

Now, there is one caveat:  If you never do anything but listen to others — women, introverts, shy guys, I’m talking to you!! — ignore this advice. Instead, work on making strong, proactive statements about yourself, your business, and your successes.

But if, like most of us, you sometimes find yourself monopolizing the floor, that’s exactly the time to take a step back and begin listening to the people around you.

How do you do that, when you’re talking full tilt?

And then I told him that if we didn’t get more people signed up before July 14th, I was going to…  oh, you know, blah-blah-blah.

For Great Public Speaking, Learn to Stop, Look, and Listen

You may have been told as a child, to stop, look, and listen for traffic before you step off a curb into the street.

STOP.  One big difference between introverts and extraverts is how quick we are to jump into speech.

This isn’t a matter of social skill, but a reflection of the fact that, for extraverts, thoughts are most real when they’re spoken out loud; whereas introverts like to hold our ideas close.

Whichever of those preferences you favor, a slight pause before you jump in will give you a chance to assess the other person — and maybe find out that they want to speak first!

LOOK. In mainstream U.S. culture, we signal our interest in another person by making eye contact.

As a bonus, when you’re looking carefully, it’s easier to pick up information — such as whether or not the other person is interested in what you’re saying — that makes the conversation go better.

If you’re very shy, or were raised in a culture where direct eye contact is considered rude, this can be really hard. But the truth is that all of us can get better at making eye contact by practicing a little bit here and there.

Just remember: Your goal with eye contact is to actually observe the other person, not to hit them with a frozen, wooden stare.

LISTEN. This one is tough enough to get its own section:

You Can Listen More Effectively (We All Can!)

Listening is really hard work — as any audience member will tell you — but it’s also a skill, like any other, that can be developed in small increments.

Here are some tricks that will help you listen better:

1. Quiet your own internal voice.

Most of us have (to quote presidential speechwriter William Safire) a nattering nabob of negativity in our brains — a voice that delights in telling us that we’re not good enough, smart enough, thin enough, blah-blah-blah.

Buddhists call this internal chatter monkey mind. Freud called it your superego. In my book on public speaking, Speak Like Yourself… No, Really!, I call it your nasty little self-critical voice.

It can be very hard to hear other people when that voice is jabbering at you.

So try to ignore it, by any means necessary, and concentrate on what the person you’re talking to is saying.

To help you do this…

2. Silently repeat what the other person says

I find it helps me to focus if I silently repeat what I’m hearing; for example:

She works in finance. She does some kind of research. She’s bored with her job and wants to find a new one with more responsibility…

In a business meeting or other situation where you must retain what’s being said, you may also want to state what you heard and get confirmation:

Tell me if I’m hearing you correctly: You said that if we don’t re-do this campaign from top to bottom, at our own expense, you’ll take your account to another agency?

In addition, you can…

Whether it’s jotting down a few phrases on someone’s business card (“tall, wearing grey shirt, met at Levin Institute”) or writing down what was actually said, taking notes can also concentrate your mind and make it easier to listen.

To say nothing of reminding you, later on, what was said!

You Can Listen to Audiences, Too!

Stopping, looking, and listening before you speak can help you structure a conversation that’s a real exchange, and connects you to another person.

But for public speakers, it doesn’t end there. We also need to listen to our audiences — and in Public Speaking Tip 13, I’ll show you how!