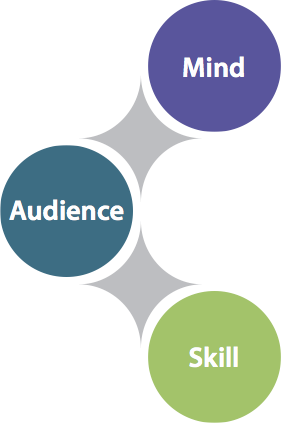 By now, you’ve created most of the conditions for a confident, successful presentation:

There’s just one more part of this experience to go, and that’s staying calm when you go to give your speech.

…and Go For What You Know When You Deliver It

How do you stay calm when you’re delivering a presentation?

There are many other tips on this site that will help you deliver a great presentation — but the bottom line is, don’t hold anything back!

Unless you plan to panic and run (as filmmaker Michael Bay once did), now is the time to go for what you know!

Your attitude of confidence and pride (whether it’s real or an imitation that you’ve practiced) will convince the audience of your expertise — and more importantly, it will convince YOU that you’re going to make a successful, confident presentation. Have you ever noticed (sure you have!) how comedians can get things dead on right? Dan Greenburg did it in his classic book, How to Make Yourself Miserable. This makes him a public speaking expert. Sort of.

How to Be Miserable When You Speak in Public

It isn't enough to be miserable, according to Greenburg. If you want to not win friends and not influence people, you have to communicate how miserable you feel:

...you must weed out of your image any appealing qualities that might encourage people to accept you.

Here's how he suggests you work on that:

Stand facing a full-length mirror. Slowly let your chest collapse. Crane your neck forward and peer sideways out of the corner of your eye. Let your shoulders sag.

Your tone of voice should be indistinct and whiney, and it should come from your nose rather than your diaphragm.

In Public Speaking (As in Life), It Helps to Know What Doesn't Work

Greenburg really nailed this one! He's described how public speakers look when they really don't want to be talking to the people in front of them — in other words, when they're miserable, and they're sharing that misery with their audience! And—even though being miserable is clearly not your goal—go ahead and try his advice. If you want, you can take it to a point of total exaggeration, going all Drama King or Queen in your depiction of a poor, sniveling, oppressed, self-hating public speaker who knows he has no business on the stage. Yuck! And yet doing this exercise, even once, will give you a clear, physical sense of how you don't want to look to your audience!

For Public Speaking Success, Develop and Practice an Avatar that's the Opposite of Miserable

To turn Greenburg's advice on its head, create a public speaking Avatar — an alternate version of yourself that you can slip into whenever you want — that isn't miserable. To do this, take a few seconds once or twice a day to: This type of practicing will have the opposite of Greenburg's desired effect, as Amy Cuddy discovered in her research on the power of... power posing. As you create this non-miserable public speaking Avatar, you might just develop a deep and internal understanding of how to look relaxed, confident, trustworthy, and in general like the kind of person that others would enjoy listening to with respect. But then...  why the heck would you want to do that???? [caption id="attachment_15978" align="aligncenter" width="684"]