I’ve been a fan of Joss Whedon since I was introduced to him by master training writer Rose Rubin Rivera. (What actually happened was that Rose wanted to quit smoking, so we locked ourselves in a friend’s house and watched Firefly episodes for four days straight while she went through withdrawals.)

Even so, I was slow to warm to The Avengers. My attitude was, “Yeah, yeah, superheros save the earth from a crazed demi-God while wrecking most of Manhattan and exchanging witty dialogue, ho-hum, pass the popcorn.”

Then I found myself showing clips of The Black Widow to my female clients.

Sometimes, as a public speaker, it’s necessary to kick butt—and that’s no less true for women than for men.

You may be in a group that doesn’t give your words the attention they deserve.

You may feel that others overlook you because you’re female, or small in stature, or older, or younger, or a woman of color, or not the “big dog” in this crowd.

When the time comes to stand up and be counted, think of how the Black Widow, played to perfection by Scarlett Johansson, got the attention of a group of mobsters who thought they were interrogating her:

Use All Your Communications Skills

You’ve gotta love a woman who can break furniture, and heads, without mussing her little black dress. And you’ve gotta love Joss for losing the “damsel in distress” convention that so many superhero stories succumb to. 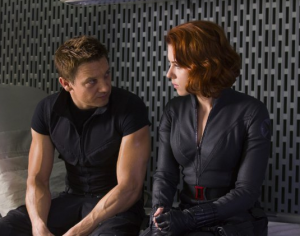 The beauty of Black Widow is that she uses all her skills:  She flies planes. She comforts friends. She flirts, she fights, she reflects, she strategizes.

It’s ironic (though not unexpected, from the man who gave us Buffy the Vampire Slayer) that, in this movie cartoon, the main female character is less cartoon-ish than the heroines of most romantic comedies.

So if you’re a woman who thinks “strong” is a complement, maybe Black Widow is your Public Speaking Avatar.

By which I mean, perhaps she’s a character, a role, a personna that you can step into when you need to step out of your own limitations, take charge, and do something you didn’t think you could accomplish—like save the world.