Long before she became Director of Recruiting at The Hired Guns, an award-winning digital talent agency, Melea Seward became my creative strategist, guiding how I’ve grown my business. But Melea could just as easily be called a futurist, a trend-spotter (she read the COVID tea leaves long before anyone else I know), a polymath (someone with wide-ranging knowledge or learning), or just a damned good person to ask for an opinion about things that matter—like job hunting!

Our conversation has been lightly edited.

JEZRA: Melea, what qualities are employers looking for these days?

MELEA: That’s not quite the right question, because it’s not about specific qualities or skills. The ability to tell your story across industries is what counts right now.

What do you mean by telling a story across industries?

There are a lot of people—say, in travel and hospitality—who suddenly found, in 2020, that they didn’t have an industry anymore. But they still had skills, and many of them just shifted to other industries.

The people who did that most successfully were the ones who could see what I call “the analogous benefits.” They could talk about how their skills transferred to new settings. Instead of saying, “I know how to clean a hotel room,” they would say, “I have a great record of customer service.”

Instead of saying, “I can sell streaming services,” they would say, “I’m passionate about sales.”

They made the connection between whatever problems they were solving, and the new problems that a new job would require them to solve. And then they moved and shifted into other industries.

—can be relevant to somebody in a wildly different industry.

Alvin Toffler, the futurist, once said, “The illiterate of the future are not those who can’t read or write but those who cannot learn, unlearn, and relearn.” He might have added that you need to show people you can relearn—because that’s how you win the job hunting sweepstakes.

OK, but WHY is it important to be flexible about the industry you choose?

Because some industries, like healthcare and alcohol, are killing it these days. And others, like crypto, aren’t.

Overall, though, there are not enough candidates. There are more jobs than there are people looking, in every industry.

Wait, is that true even in tech, that there are more jobs than people?

100% true. You can see it when you go into a restaurant: Everyone is under-staffed. But it’s also true across the board, in every industry, including tech.

When somebody like Amazon lays off 10,000 people, the media makes it sound decisive. But Amazon employed 1.2 million people worldwide in 2020; so unless 10,000 people who do your exact job were laid off, that doesn’t change your job hunting prospects.

OK, so I get that this is an amazing time to look. But what about getting an interview? There are so many barriers, if you don’t already know people. Do you have any advice about that?

The beautiful thing about LinkedIn is that it’s an incredible database. You can figure out who you know at an organization, or who you know in common with someone who works there. You might be able to figure out who the hiring manager is, or who the talent acquisition person is.

If, instead of just sending a resume without context, you can drop a note into their inbox about why you’re a qualified person for that particular role, you’re much more likely to get on the phone with them. And then you’re much further along than just being a random person.

Or you can contact the person who’s recruiting for a particular job, email them directly and say, “I’m interested in this role.” At a time when a lot of people are applying for jobs, that can help tilt the signal-to-noise ratio in your favor. People who get to the front of the recruiting line, that’s what they do.

Where do you find recruiters? How does someone get recruited by a firm like The Hired Guns?

Number one, on LinkedIn, you have the option of turning on “Open to Work.” That’s an easy thing to do. Number two, do your research, find recruiters who work in areas of interest to you, and reach out to them. And if you get an email from a recruiter asking about your interest in a specific opportunity, respond to them and start to build a relationship, even if you’re not interested right now. Building relationships with recruiters in your industry is a smart thing to do, because you never know when you’re going to need them, or they’re going to need you.

During the interview, is it still important to ask a lot of questions?

You won’t get to ask them all; interviews have a hard stop time. But questions that project you into the role and show that you’re genuinely serious about the company are important, along with questions that clarify any confusion you may have. (Make sure, though, that you couldn’t have answered your own question with 30 seconds of Google.)

Also, if you notice that you’re getting to the interview’s end, a comment like, “I want to be mindful of the time; are there other things you’d like to ask me?” can show emotional intelligence.

After the interview, is it still good to send a thank you note?

Yes, because you want to continue the conversation. So your thank you note shouldn’t just say, “Hey, thank you so much for your time.” Everybody does that.

Instead, at the end of the interview, after you’ve asked some questions, say, “As I think more about this opportunity, do you mind if I send you a follow up question by email?”

Once you’ve got their permission, your thank you note becomes more of a discussion of how you think about the job, along with a chance to ask a few follow up questions.

There’s a dance to this. You don’t want to go overboard, but if you engage your interviewer strategically, and subtly act like you’re already a colleague, this can put you ahead of the pack.

Is there anything else job hunters should be thinking about?

So suddenly, digital talent—marketing, editorial, content, product management, project management, engineering, and so forth—has its pick of the litter. And there’s a two-sided aspect of job hunting that wasn’t there before COVID.

Remember that when you’re out looking. You need a new job, but employers also really need you! 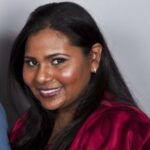 We did it! My presentation went great, and I received great feedback from the team. Thank you for helping me get here!