First, A Little Background on TED

The TED conference (which stands for technology, entertainment, design) began life in 1984 as a yearly and very expensive conference where industry leaders and creative types gathered to exchange “Ideas Worth Spreading.”

Back then, it was all about the live experience, and speakers were expected to bring some quirky spontaneity to the stage.

But fast forward more than 30 years, and TED has become an institution, spawning countless local “TEDx” events, putting hundreds of speeches online each year, getting millions upon millions of views, and changing the way we all think about public speaking!

According to Chris Anderson, the owner and global curator of TED, every TED talk starts with an idea: 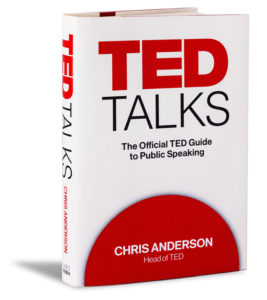 “You have something meaningful to say, and your goal is to re-create your core idea inside your audience’s minds.”

—from TED Talks: The Official TED Guide to Public Speaking

Anderson calls this idea “the gift in every great talk.” Your idea may:

But in every case, your TED talk will begin with an idea.

And whether or not your talk actually builds a model of your idea in your listeners’ brain — Anderson takes that literally, and research on “neural coupling” backs him up — your TED talk exists to communicate this idea to your listeners.

That is your talk’s one and only goal.

Other Qualities of Successful TED Talks

Ideas are complex things; you need to slash back your content so that you can focus on the single idea you’re most passionate about, and give yourself a chance to explain that one thing properly… Everything you say [should link] back to it in some way.

Stir your audience’s curiosity. Use intriguing, provocative questions to identify why something doesn’t make sense and needs explaining. If you can reveal a disconnection in someone’s worldview, they’ll feel the need to bridge that knowledge gap.

Build your idea, piece by piece, out of concepts that your audience already understands… A vivid explanation… delivers a satisfying ah-hah! moment as it snaps into place in our minds.

These are important best practices, but they don’t tell you what to do to create a TED talk.

For that, try this…

To hone in on your idea worth sharing, it can be useful to ask yourself things like:

And remember, you’re looking for an idea. As Jeremey Donovan says in How to Deliver a TED Talk,

Step 2. Develop an unexpected and/or catchy way to state your idea

If your idea can be stated in a catchy way, listeners will pay more attention and remember it more easily. Here are some examples (with more conventional versions of the same idea in parentheses):

Step 3. Collect anything and everything that relates to your idea

To re-create your idea in the minds of your listeners, you’ll need vivid examples, illustrations, stories, facts, questions, comments, etc.

So take a few days to notice anything and everything that relates to your idea, and collect these materials by writing them down, taking photos, recording your thoughts as sound files, etc.

Basically, anything that comes to your mind at this stage should be collected.

And don’t worry yet about which materials will end up in your talk.

You can’t collect things and evaluate them at the same time, so just collect for now; you’ll have a chance to evaluate later.

Step 4. Start imagining how you might open and end your talk

While it’s too soon to choose your opening and close, it’s not too soon to start playing with ideas for these important parts of your talk.

An effective way to begin any speech (not just a TED talk) is to grab your audience’s attention — often with a human interest story, a surprising statistic, an unexpected observation, or a thought-provoking question.

There are probably some great attention-grabbers in the material you collected for Step 3. Pick one that you particularly like, and flag it as a possible opening for your talk.

As for the close, you’ll probably want to end your talk in a positive, forward-looking way. This is often done by:

With your provisional opening and close in mind, you’re now ready to…

Step 5. Put the rest of your materials in a reasonable order

The middle of any speech is tricky, and a TED talk is particularly so, because TED talks can take just about any form you’d like.

So to tackle this part of your TED talk, take the materials you’ve collected and shuffle them until you find a good arrangement. To do this, you can:

How will you know when the order is good?

Keep in mind that your goal is to create an understanding of your idea in the minds of your audience members, and try to arrange your explanations, comments, and stories in a way that leads to that goal. (You’ll get to test this on real people in Step 7.)

Trust your instincts: If something seems out of place to you, it probably is. Try moving it to a different part of your talk or even skipping it, and see if that works better.

And don’t expect to find the best organization for your talk the first time you try, because that almost never happens!

Step 6. Talk your way to a rough draft of your script

This is where your “speaking plan” becomes a “speech.”

Take your outline or list of ordered elements and talk about each item in turn.

When I’m writing a speech, I like to literally talk it out loud and type up what I’m saying as I’m saying it — but you can also use your computer’s voice recognition software to capture your words, or talk into the voice memo feature on your phone (this used to be called “dictating”) and type up the sound file later.

Why record yourself talking instead of just writing out the speech?

Because most of us get all formal and stiff when we write, and the ideal for a talk is that it sounds like you’re… talking!

And here’s a hint:

As you do this step, pay particular attention to the way different elements (materials) that you’ve used in your talk are connected.

If, for example, you tell me that:

When you spell things out clearly, people will form a clear picture of your point.

Step 7. Try out your Ted talk draft on a volunteer listener

The point of this step is to get feedback on how to improve the structure and clarity of your draft.

Ask someone you trust — a smart 10-year-old is perfect — to listen to your talk.

Read it to them (because you haven’t finalized, let alone memorized, it yet), and then ask them:

If your listener wants to discuss the 6,000 facts you left out, or how your talk should really be about X instead of Y, gently lead them back to these questions.

3. Try out your new draft on a volunteer listener, get their feedback, and repeat these steps as often as needed until your talk has taken a satisfying shape.

There’s no better time to start working on your talk than now. Even if your schedule is crammed, you’re better off working for a few minutes each day than leaving everything to the last minute!

And as you work this process, remember that perfection isn’t possible.

So instead of striving for perfection, prepare carefully, take your best shot, and try to relax.

Your audience is going to love this talk — and you deserve to enjoy it, too!

Need Coaching or Speechwriting for Your TED Talk? Get in Touch!