For some of us, it’s a warm, relaxed opportunity to catch up with people we love and don’t see often enough.

For others, it’s a living hell.

When you mix alcohol, proximity, long-held resentments and, sometimes, people who don’t want to behave, you’ve got all the ingredients for an explosive feast of flaring tempers and angry words.

Thanksgiving Meltdowns are Predictable — Be Forewarned and Forearmed 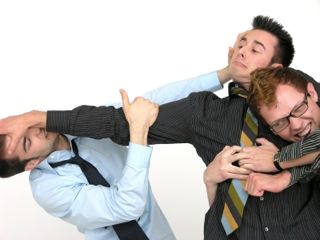 First, do some thinking, or brainstorm with your spouse, kids, or trusted friends before T-Day.

Usually, the factors—and people—that are likely to veer out of control are pretty predictable: Your Mom sniping at your sister. Cousin Julia sniping at pop music. Uncle John drinking too much and sniping at everything.

So now’s the time to think about how your particular Thanksgiving dramas can best be defused.

Choose a Key Message Before the Event

For each potential problem that you’ve identified, pick one statement that you’ll commit to memory and repeat ad nauseum (’till everyone’s sick of it) when the fireworks start.

Now, of course, if you like arguing on Thanksgiving, and if your crowd can do it without bringing out the knives, by all means, indulge! I’m talking about how to shut down “conversations” that only one person wants to have.

Whatever Happens During Thanksgiving Dinner, Stick to Your Key Message

You: You know, I’m just glad we could all be together today.

Mom: You can’t really approve of that hideous new tattoo?

You: I’m happy we’re all together.

Mom: She’s getting more outlandish every day. She’s never going to get a decent job the way she looks.

You: Mom, aren’t you glad that we’re all together for Thanksgiving?

Of course, the fact that you’re only saying one thing doesn’t mean you can go on auto-pilot. Instead, stay relaxed yet attentive, like a Ninja on coffee break.

And be particularly aware that you might get hit with a lateral sneak attack, when your opponent realizes that his or her Plan A isn’t working:

Mom: Of course you would stand up for her! You looked just as ridiculous as she does when you were her age.

You (take a breath and let it out slowly): Well, separate from how anybody looks, I think it’s great that we’re all together for Thanksgiving!

As long as you’re cool, calm, collected, and implacably sticking to your positive point, you will ultimately win the day.

This is hard work, but much less difficult than getting drawn into a silly screaming match when all you want to do is eat too much and get home in time to watch the game.

Last but not least, be grateful for the people you love, even if they are dysfunctional.

And be grateful that you won’t have to face them all together for another year!

(And let the last word go to SNL)