The U.S. election of 2016 ushered in lots of public speaking and communications trends, and many of them — like the return of overtly racist language — are terrible.

So bad that they put me in mind of a story that’s told about Mahatma Gandhi:

REPORTER: What do you think of Western Civilization?
GANDHI: I think it would be a good idea.

I think Western Civilization would be a good idea, too; but the following trends make me wonder about its chances.

The U.S. has been trending toward lies — making them up, spreading them, defending them — for decades now. But it took 2016 to totally dethrone the idea that “truth” even exists.

Of course, Hughes isn’t alone in her opinion that truth is obsolete and that facts are no more factual than your opinion of them.

On the other hand, lots of people are saying that facts can withstand this disdain because facts — like truth, like science — exist, separate from whether or not we believe in them. 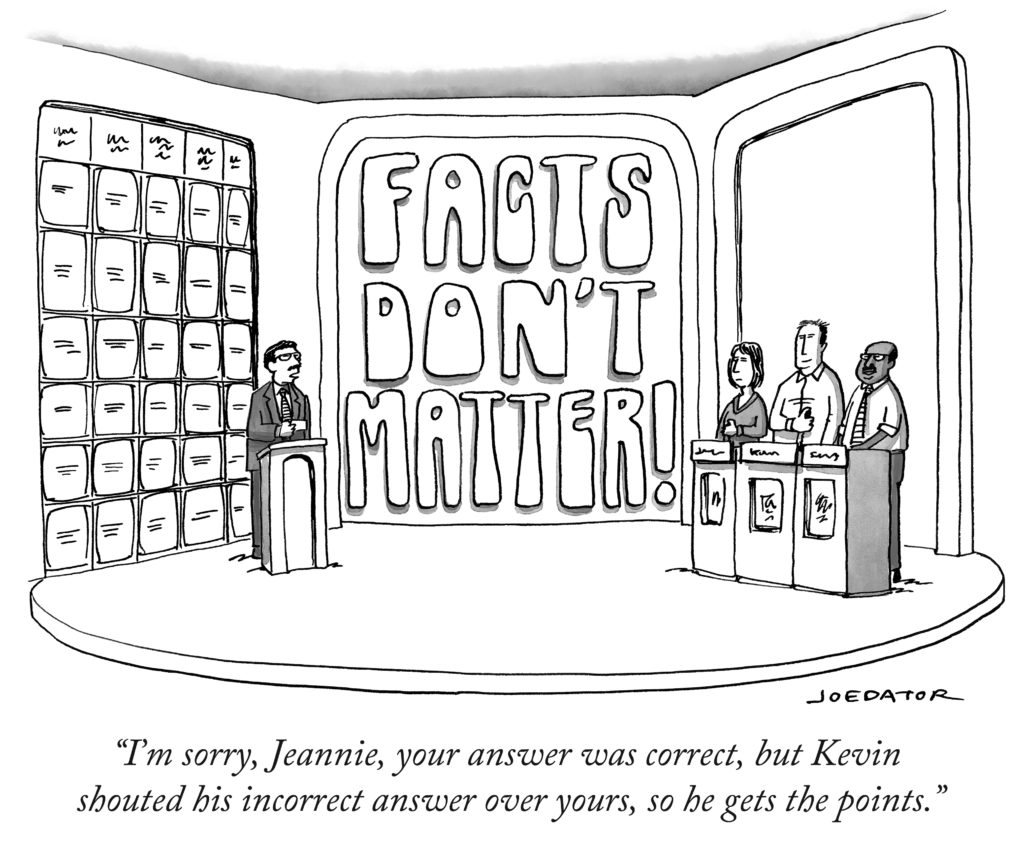 (This cartoon also illustrates another terrible public speaking trend from 2016: shouting down and bullying your opponent.)

In 2014, Amanda Hess wrote a staggering account of the death and rape threats she’d received for the crime of… being a woman with opinions on the Internet.

For Hess and countless other female bloggers, for members of the LGBT+ community, for people of color, and for journalists who work in countries where their lives are constantly at risk (48 were murdered in 2016, according to the Committee to Protect Journalists), the new fashion in death threats is surely no surprise.

But doesn’t it seem that, rather than being a shocking exception, death threats are now the ubiquitous rule? Megyn Kelly and her family hired private security after a barrage of death threats. Conversely, a tech CEO was fired after Facebooking death threats against Trump.

My most-read public speaking blog post is a step-by-step explanation of how to write a thank you note following a job interview.

Do I now have to write a post about the syntax of death threats to stay current?

Like death threats, this one is a yawn for many people of color who want to know what kind of dream world white liberals have been living in these past years.

But this trend has been a shock for many people, including me.

I won’t repeat any of the despicable examples that are now flooding our streets, our schools, even the mainstream media.

I’ll just say that now would be a good time to prepare yourself so that, if you need to interrupt racist behavior, or attacks on people from other vulnerable groups, you’ll know what to do.

Two things that have helped me prepare are:

So What’s Next in Public Speaking Trends?

On the one hand, we’ve seen this movie before and it didn’t turn out well. On the other hand, perhaps with so many of us longing for civility, truthfulness and decency, we have a chance at turning things around.

And meanwhile, as a character in one of Emilie Richards’ novels put it, “Live for something better.”