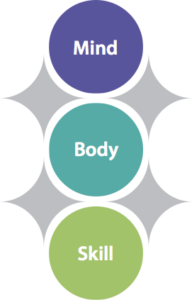 Like everyone else who’s seen the show, I’m knocked out by Tatiana Maslany’s performance in the BBC’s drama, Orphan Black.

In Season 3, she also became beautician Krystal, and now, in Season 4, she’s added Mika, a badly-burned, paranoid hacker who survived the treacherous mass murder of other clone sisters.

But let’s get back to those core characters:

As you can see, this show is a total tour de force. Whether or not you’re a science fiction/thriller nerd like me, it’s exceptional entertainment.

But what can Orphan Black teach us about public speaking?

As many of you know, a public speaking “Avatar” is a persona (character) that you can slip into when you’re speaking in public.

Your Avatar is an idealized, streamlined version of yourself that includes the good qualities you want to bring as a speaker, and leaves out the negative qualities that might trip you up.

It’s fun to deploy your Avatar — and like Tatiana Maslany, you don’t have to limit yourself to one character! You can be:

Different audiences respond to different approaches, so being able to “play” more than one Avatar increases your chances of success.

Orphan Black Public Speaking Lesson #2: Change Up How You Talk, for Dramatic Effect

Although you probably can’t do five convincing accents like Tatiana Maslany (I can’t!), you can add some drama to your public speaking by sometimes talking louder, softer, faster, slower, or with more or less intensity than usual.

Have you ever spoken to a  3-year-old?

If so, you may have crouched down to make eye contact, or spoken with more animation or in a high-pitched voice.

These changes weren’t artificial or phony; you were trying to connect with the 3-year-old. In the same way, it will help you connect with an adult audience if you:

While these small, dramatic changes may not get you nominated for a Golden Globe, they will make your presentation easier to hear and remember. You’ll have more fun, and your audience will, too.

The Orphan Black clones aren’t afraid of being copies — and you don’t need to be afraid of copying!

Human beings have probably been making speeches, talking to their colleagues, meeting new people, and trying to sell their wares since… well, since we became Homo sapiens. So the idea that you’re going to give a completely original speech is pretty much a non-starter.

That being the case, why not adopt some of the best practices that public speakers have been developing for at least 4000 years? For example:

Of course, there are lots more of these best practices (I wrote an entire book about them), but the point is: Don’t be afraid to do things like transitioning to a new topic in a tried-and-true way.

And don’t worry about sounding stale. If you’re speaking with animation… if you’re serious about what you’re saying…  if you have a dynamic Avatar… you won’t sound like a clone!