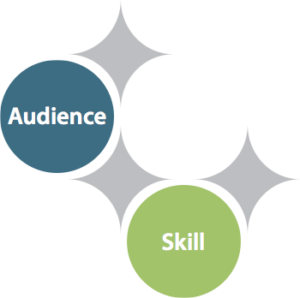 This has become a kind of business meme in the last few years, but come on, folks: Why hate on PowerPoint just because people use it badly. (And by “PowerPoint,” I mean Keynote and Prezi, too.)

PowerPoint is just a tool.  I mean, would you hate on a hammer because you saw somebody drive a crooked nail?

Let PowerPoint Show You How to Keep It “Short”

Many people are surprised to learn that PowerPoint will actually coach you to notice when you’re putting too much text on a slide.

Next time you create a PowerPoint slide that has text bullets, notice that, when you get past what the program thinks is critical mass, everything suddenly shifts:

This is a clear signal that you’ve gone too far and put too much text on your slide.

So what do many people do when this happens? Instead of choosing the few words or image that best represent their thoughts — or turning one slide into two —  they add even more text, until the typeface is tiny and the space between lines almost disappears.

Is it PowerPoint’s fault that no one understands their slide?

Remember that old expression about a picture being worth 1000 words? That’s particularly true of PowerPoint.

Internet influencer Seth Godin wrote about this in 2007, is his classic post on “Really Bad PowerPoint.” In it, he said,

[M]ake slides that reinforce your words, not repeat them. Create slides that demonstrate, with emotional proof, that what you’re saying is true not just accurate.

Talking about pollution in Houston? Instead of giving me four bullet points of EPA data, why not read me the stats but show me a photo of a bunch of dead birds, some smog and even a diseased lung? “This is cheating! It’s unfair!” But it works.

Notice that you can give the stats to your audience without putting them on your slide! You can read them while they’re looking at your picture, and put them in handouts or an email that’s distributed after your talk.

No one will remember the numbers; and no one will forget the birds.

Instead of Telling Everything You Know, Keep It “Simple”

How much do you remember after hearing a speech?

As audience members, we’re very clear that most of what we’re hearing isn’t going to live in our memories for long. But when we’re preparing to deliver a talk, the pull to forget that truth and tell the audience as much as possible can be very strong.

That’s why it’s important to resist temptation and not load your talk up with slide after slide, point after point, fact after fact. Doing that makes it harder for your audience to choose what to pay attention to.

In a famous social science experiment, Sheena Iyengar and Mark Lepper showed that people are more likely to buy jam if you give them 6 choices instead of 24 choices. Here’s Iyengar talking about “choice overload”; notice how simple and clear her slides are!

If you load up a presentation with dozens of slides and hundreds of bullets, it will be difficult for your audience to distinguish what’s really worth remembering.

It’s better to give them less information and be clear about which pieces are the most important.

When you keep your slides

the truly important ideas will stand out.

And, as in the jam experiment, it’s more likely that your audience will buy them!