Last Thursday was a gorgeous day in New York: cool breezes, a little hint of fall in the air. So I went out for a food and cultural walking tour of the Lower East Side with awesome tour guide Ray McGaughey.

Walking from the subway to the meeting point in Chinatown, I passed by Sara Roosevelt Park, described on NYC Park’s website as “a shimmering stretch of green amidst the sea of concrete, asphalt, and tightly-packed buildings.”

The Baby Makes a Break for Freedom 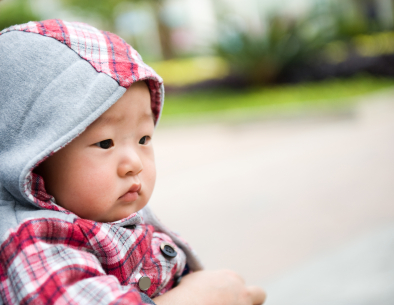 As I passed by, a beautiful little girl—maybe 18, 20 months old—walked sedately out of the park, faced the nearby (very busy) street and started toddling toward it.

Of course I put my hand out, took hers and said, “No! You can’t go into the street, you have to go back to Mommy. Where is Mommy?”

Clearly, she didn’t understand English, but she was totally willing to go along with the program. (Scary when you realize that my program might have been taking her back to Brooklyn to raise as my grandchild).

As I turned her back toward the park, I expected Mommy (or Daddy, or Caretaker) to come running toward me and reclaim this adorable child. But no one came.

In fact, there was no other adult within shouting distance. I picked up the baby, and waded into the park.

I Search for the Baby’s Caretaker

On the far periphery, several groups of adults sat talking. No one seemed to notice the sole white girl in the park (that would be me), walking toward them carrying a Chinese baby who clearly wasn’t my own.

To make a long story short, it took almost ten minutes to find the woman to whom this child was (loosely) attached. (The baby could have been halfway to Brooklyn on her own power by that time!)

When the caretaker finally emerged from a knot of women and held out her arms for the child, I refused to give her up. I stood there with women shouting Mandarin at me, and loudly asked for someone who could translate.

Finally a girl of about 10 came forward and said that she spoke English.  I asked her to tell everyone that the baby had wandered far, far away from their group and had been walking out of the park, and toward the street.

Okay, okay, they gestured, now give us the baby.

I replied through my translator that I wasn’t giving the baby up until I was convinced that someone would watch her. Everyone was speaking loudly. I was angry, and very upset.

Don’t Smile at Me When I’m Ripping You a New One!

Here’s where the cross-cultural stuff comes in:

I did my best to notice this dynamic, and not let the steam blow out of my ears. But it’s easy to see how the two of us could have gone around this block all day, becoming increasingly offended.

Finally, the 10-year-old persuaded me that the baby would be safe. I handed her over (reluctantly!), thanked my young translator, and accepted thanks from the Chinese women.

Then I went to meet Ray’s tour group, and spent the next two hours happily wandering the Lower East Side eating pickled pineapple and bialys, and drinking coffee at The Roasting Plant, a new place where they grind your beans individually before brewing them.

What’s the moral of this story?

Damned if I know.

Learn Mandarin? Keep an eye on your children? Find a 10-year-old to translate?

All I know is, I’m glad I was passing by. I’m glad I kept communicating, even though it felt like I’d run smack into the Tower of Babel.

And I already miss that baby girl.